“In 2011 the European court of justice ruled that the Greek reception conditions of asylum seekers are inhumane, and now the rest of Europe closed it’s borders! Flash forward 40 years, I think we’ll be absolutely ashamed of what’s currently happening here. It’s a humanitarian catastrophe on a major scale.” For a year now, the initiator of foundation Because We Carry puts her heart and soul in helping refugees on Lesvos. In the meanwhile ‘transit’ countries become tough on refugees, making it hard to further travel.

“I’ve been traveling around the world since age five and was often busy helping others. When I started hearing the stories of so many people fleeing, it began to scrape at my feelings and thoughts…” By the end of August 2015 she left to Lesvos along with two friends. “We collected a thousand baby carriers to hand out to fleeing parents, in an attempt to make the carry of their children a little easier. But once we saw the boats in the sea, all those people with panic in their eyes, we decided to stay and care for them.” 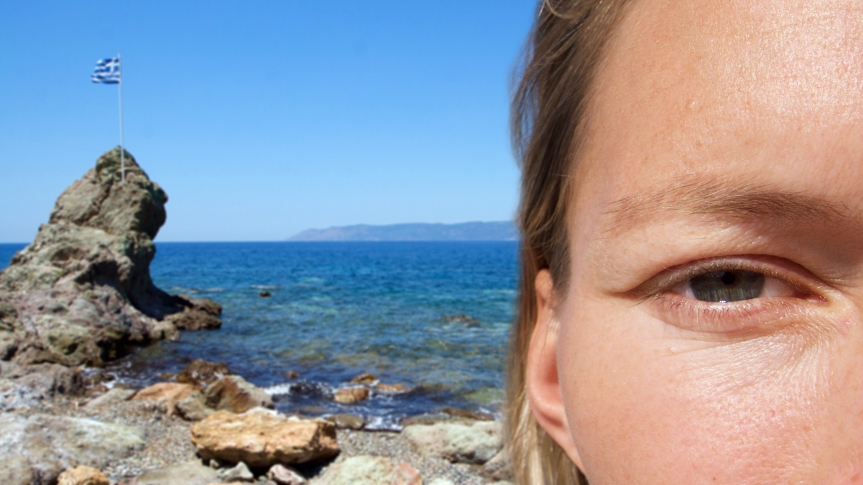 “Shortly afterwards the photo of the little boy’s body washed up on shore became world news. Suddenly we – those cute blond girls with their baby carrier initiative – started receiving a lot of media attention. We received financial aid from lots of people and companies. This is how we managed to grow so much within such short time.”

The foundation then started handing out food to people awaiting registration. “When you do something, it’s ok if it’s fun. That way people can forget their misery for a second. So we put down a big speaker and danced on top of the supply vans. While people were waiting in line for food, we made a party of the wait.” It became a warm welcome to Europe for many who later continued traveling across countries.

“I believe in doors: they either open wide or stay shut, no matter how hard you push. During the time I was working as a tv host, I often called to closed doors. Two years ago I became ill: a tumor in my head. Now I’m healed and here. This my path. I’m good in inspiring people and I can act quickly. We’re not a traditional foundation but a movement, one that accomplishes things. In The Netherlands we’ve got an entire team working, and I work from here. Doors are opening for us.”

As of April the foundation works in Kara Tepe. Every day a team of volunteers provides a breakfast, banana and activities for the refugees there. “We also focus on ‘little’ things and make a difference that way. For example by acquiring a nursing bra for a woman who just delivered.”

“It’s hard work, no doubt. My biggest challenge is to feel less guilty. I put a lot of time and energy in helping others, but there are so many distressing situations here and one can’t possibly work nonstop. I also enjoy the lovely food and weather on Lesvos. Isn’t it great to follow your passion of helping others, and do so in such a beautiful place? I’m happy here!”

Would you like to know more about the circumstances in Lesvos? Read: About Lesvos