“We’re already used to heat in Cameroon but over there we also have houses built to shield us from the scorching heat.” Over here he lays in his tent on piping hot concrete, just like many others.

“By now there’s ten of us from our country.” He points at two French speaking friends: “They’re here three months, I’m here two. First you’re stuck here. After 25 days you receive a document which allows you to leave camp Moria and walk around through the area. Without this piece of paper, the police can arrest you and throw you in jail.” 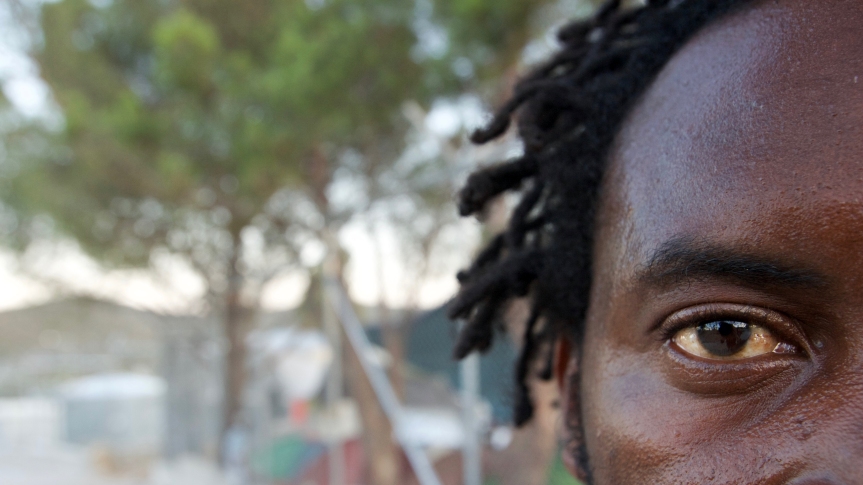 In a corner of the camp these men form “small Africa” along with refugees from among others Congo, Eritrea, Ethiopia, Somalia, Morocco and Algeria. “The atmosphere is really bad here. There are fights going on every evening, divided by countries. Afghanistan against Pakistan, Iraq against Afghanistan and so on.” Fighting doesn’t seem to fit him. He comes across civilized and highly educated. He says he studied at a university for three years. He speaks fluently French and good English.

“I had to flee because of our traditions. My father tried to force me to undergo a traditional ceremony, which I absolutely did not want to take part of.” He doesn’t want to share what kind of ceremony it involved. “My father would have killed me for choosing not to go, but my mother gave me money to escape.”

He managed to get from Cameroon to Turkey where he stayed for eight months. “Unfortunately I wasn’t able to find work there.” He pulls out a necklace with a cross from underneath his shirt. “I’m a Christian. There aren’t any jobs for us in Turkey.”

“The journey here by boat was pretty bizarre. The boat was overloaded. We were with about 65 people from different countries. They pointed at the lights across the water and said: ‘See these lights there? That’s where you need to go to.’ One refugee who mentioned he navigated a boat before, was put in charge and there we went… It took us three hours.”

He arrived safely on shore and has by now applied for asylum in Greece. “Otherwise they send you back anyway and for me it’s mainly about the guarantee of not having to return to Cameroon to start with. Germany has my preference.”

Would you like to know more about the circumstances in Lesvos? Read: About Lesvos